Way To Paris (Champs Elysees), winner of this year’s Group 1 Grand Prix de Saint-Cloud, will retire to Coolagown Stud in County Cork after running in the Japan Cup at the end of the month. The stallion deal was brokered by bloodstock agent Richard Venn.

Trained by Andrea Marcialis for owner Paolo Ferrario, the handsome grey was one of Europe’s leading middle-distance horses of recent years. Timeform rated 123, he also won the Group 2 Grand Prix de Chantilly by four and a half lengths and the Group 2 Prix Maurice de Nieuil, and defeated Sottsass and French King this season.

High-class, durable and consistent, Way To Paris finished placed in another 13 black-type races, most notably when narrowly being denied another Group 1 success when a fast-finishing head second to Sottsass in the Prix Ganay and as runner-up to Waldgeist in the Group 2 Prix Foy.

Pierre-Charles Boudot, who steered Way To Paris to victory in the Grand Prix de Saint-Cloud and Grand Prix de Chantilly, paid tribute by saying: “He’s a strong horse who stayed well and had a great turn of foot. He is a beautiful individual, a handsome grey with a lovely coat and a powerful physique. He is a determined horse who handles all types of going. His biggest strength is in his acceleration in a finish.”

Way To Paris retires to stud sound with more than €620,000 in prize-money having raced from the age of two to seven, in which time he beat 13 individual Group 1 winners of 21 Group 1 races.

Way To Paris also holds significant appeal on pedigree. He is by the beautifully bred multiple Grade 1 winner Champs Elysees, whose Flat progeny include Ascot Gold Cup hero Trip To Paris and Classic-winning filly Billesdon Brook. The sire was tremendously popular in his two seasons standing in the Irish National Hunt ranks until his premature death in 2018. 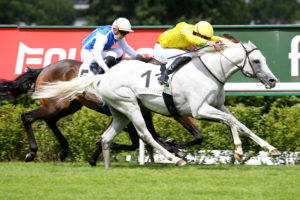 Furthermore, Way To Paris is a half-brother to dual Group 1 winner Distant Way out of the Group 2-winning Cozzene mare Grey Way and he hails from the family of leading sires Private Account and Woodman and Kentucky Derby winner Super Saver.

Richard Venn said: “Way To Paris had been on my radar for some time. As you can imagine, we had to fight off determined interest from several French Studs, so to start off his stud career in Ireland is a real coup for Irish Breeders.

“As his race record has shown he is a sound, consistent and talented individual at the highest level. In addition he is an exceptional looker and he has an excellent pedigree; he could be very interesting for flat mares as well.  His introductory stud fee really reflects what is currently going on in the world and the ramifications it is having on our industry.

“I would also like to extend my thanks and appreciation to Paolo Picchi (Mr Ferrario’s manager), who has made the dream a reality.”

Coolagown Stud manager David Stack said: “I’m very grateful to Mr Ferrario for entrusting Way To Paris to Coolagown. When you speak to breeders they are looking for tough, honest, sound and consistent horses, and Way to Paris epitomises all these traits. If his offspring get a hint of his class and durability then he will be a top-class sire.

“He’s also a gorgeous-looking horse who stands 16.1 hands and has a wonderful temperament. I can’t wait to show him off to breeders.”